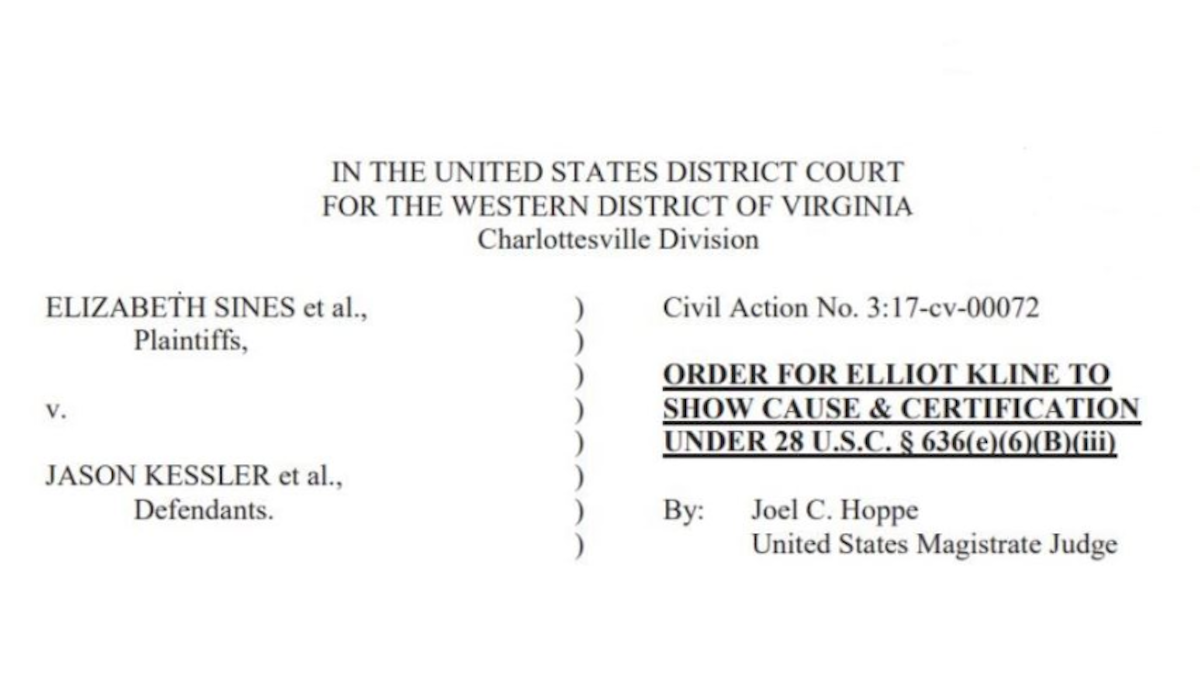 Court Orders Kline to Appear for Contempt Hearing on November 25

CHARLOTTESVILLE - A federal court just recommended significant monetary sanctions and the possible arrest of neo-Nazi defendant Elliott Kline (aka Eli Mosley) in Sines v. Kessler—the landmark federal lawsuit backed by Integrity First for America against the neo-Nazis, white supremacists, and hate groups responsible for the Unite the Right violence. Kline was also ordered to appear in court in November 25th for a contempt hearing on the matter. Click here to read the full order.

Kline was a primary organizer of the Unite the Right violence in Charlottesville over August 11 and 12, 2017 and a former leader of the white supremacist hate group, Identity Evropa—another defendant in Sines v. Kessler. The lawsuit details how Kline and his fellow defendants meticulously planned the violence for months in advance, including via the online chat platform Discord.

Kline continued to willfully defy the court, complying with virtually none of his discovery obligations. Plaintiffs filed this sanctions motion against Kline on September 26th.

The order reads in part, “Most of Kline’s answers during the August 7 deposition were evasive, internally inconsistent, or simply not believable... Kline admitted that he had responsive information and documents in his possession, he understood his obligation to produce those materials to Plaintiffs, and his former counsel had explained that he must preserve potentially relevant evidence for discovery. Kline never took any steps to preserve this information, such as backing up his emails or the contents of his phones.”

It continues, “The facts certified above, in my opinion, show that Kline disobeyed seven court orders requiring him to provide or permit discovery of relevant materials and information for Plaintiffs’ use in this litigation.... Based on my familiarity with the protracted pretrial discovery in this case generally, and Kline’s “[c]ontinued contumacious behavior” in particular, I respectfully recommend that the presiding district judge grant in part Plaintiffs’ motion.”

“The defendants in this suit orchestrated the violence in Charlottesville two years ago - and have been trying to run from accountability ever since. Sanctions like these send a clear message that there will be real financial penalties—and even arrest—for flagrantly flouting court orders. Our brave plaintiffs will continue to fight to ensure these neo-Nazis, white supremacists, and hate groups are fully brought to justice for the violence they caused,” said Integrity First for America Executive Director Amy Spitalnick.