On May 21, 2017, white supremacist and Unite the Right organizer Jason Kessler posted a message to all members of the private “Alt-Right Events Project” server on the messaging site Discord: “I think we need to have a Battle of Berkeley situation in Charlottesville. Bring in the Alt-Right, Proud Boys… [Nathan] Damigo, [Richard] Spencer and fight this shit out.”

Over the next three months, some of the most notorious white supremacists, neo-Nazis, and hate groups in America meticulously planned for battle. They organized on Discord and other social media platforms, over text messages, and through in-person meetings. Then, on August 11 and 12, 2017 they attacked the city of Charlottesville – injuring dozens, killing Heather Heyer, and rocking a nation that had become far too complacent about the growing threat of white supremacist extremism. Afterward, they declared the “Battle of Charlottesville (3548)” – publicly marketed as Unite the Right – a massive victory.

But four years later, the organizers of the violence found themselves defeated. In a courtroom in Charlottesville, a jury found in favor of nine individuals injured in the violence, in a landmark federal lawsuit backed by Integrity First for America. Kessler and his co-defendants were ordered to pay over $26 million in damages for entering into a conspiracy to commit violence and for other illegal acts.

Now, for the first time, IFA is releasing a searchable inventory of the exhibits which – along with witness and expert testimony – led to this historic verdict against the organizers of the Unite the Right violence.

Attorneys for the plaintiffs spent years gathering the evidence required to prove that the defendants engaged in an unlawful conspiracy. Such claims are not easy to prove under normal circumstances, as conspiracies are, by their nature, secretive.

But these were not normal circumstances. Some of the defendants refused outright to cooperate in this lawsuit. Some went into hiding. And many who ostensibly agreed to “cooperate” still employed every trick in the book to evade justice and accountability.

Jeff Schoep, the former leader of the National Socialist Movement, claimed his phone fell in a toilet. His successor provided invalid logins so that the group’s email accounts could not be accessed.

Matthew Heimbach – who handled outreach to a number of hate groups involved in the violence, while leading his own group, and therefore possessed evidence important to the case – destroyed every device he used to communicate about the event. He claimed his girlfriend also deleted his social media accounts after a fight.

Vanguard America (the hate group James Fields marched with in Charlottesville) claimed computers and other devices had been mysteriously destroyed.

As discovery issues delayed the case, Judge Norman K. Moon remarked, “I’ve spent more time on your discovery issue than on all the other cases I’ve ever had in… 22 years.” He was speaking to a single defendant, lead Unite the Right organizer Elliot Kline.

No matter how hard the defendants’ tried to avoid accountability, our legal team and plaintiffs were tireless in pursuing the evidence to which they were entitled. There were also some fortunate breaks. In the days following the violence, Unicorn Riot published the contents of the Discord servers used by the Unite the Right organizers and many participants. Thousands of chats were made public, providing an immense amount of details before the lawsuit was even filed. While our team eventually subpoenaed the full servers from Discord itself, these initial leaks provided crucial early information that made the speed and breadth of the initial complaint possible.

Over time, the court also granted a number of our plaintiffs’ motions for monetary and legal sanctions against defendants who continued to flout discovery obligations. In other cases, the judge allowed the jury to infer that the destruction or withholding of evidence was in and of itself evidence of wrongdoing.

In addition to the full trial transcripts, the exhibits published today make accessible to the public even more of the details presented to the jury - which led to the historic verdict and exposed the inner-workings of these extremist groups and leaders.

Beginning with Kessler’s original Discord message about the need for a Battle of Charlottesville, the evidence shows that Unite the Right was envisioned from the very beginning as a violent riot – not a peaceful protest.

The documents show how the organizers normalized and encouraged violence at the event. They offered advice on drawing counterprotesters into confrontations, and allowed posts about weaponizing flagpoles and running down counterprotesters with cars. 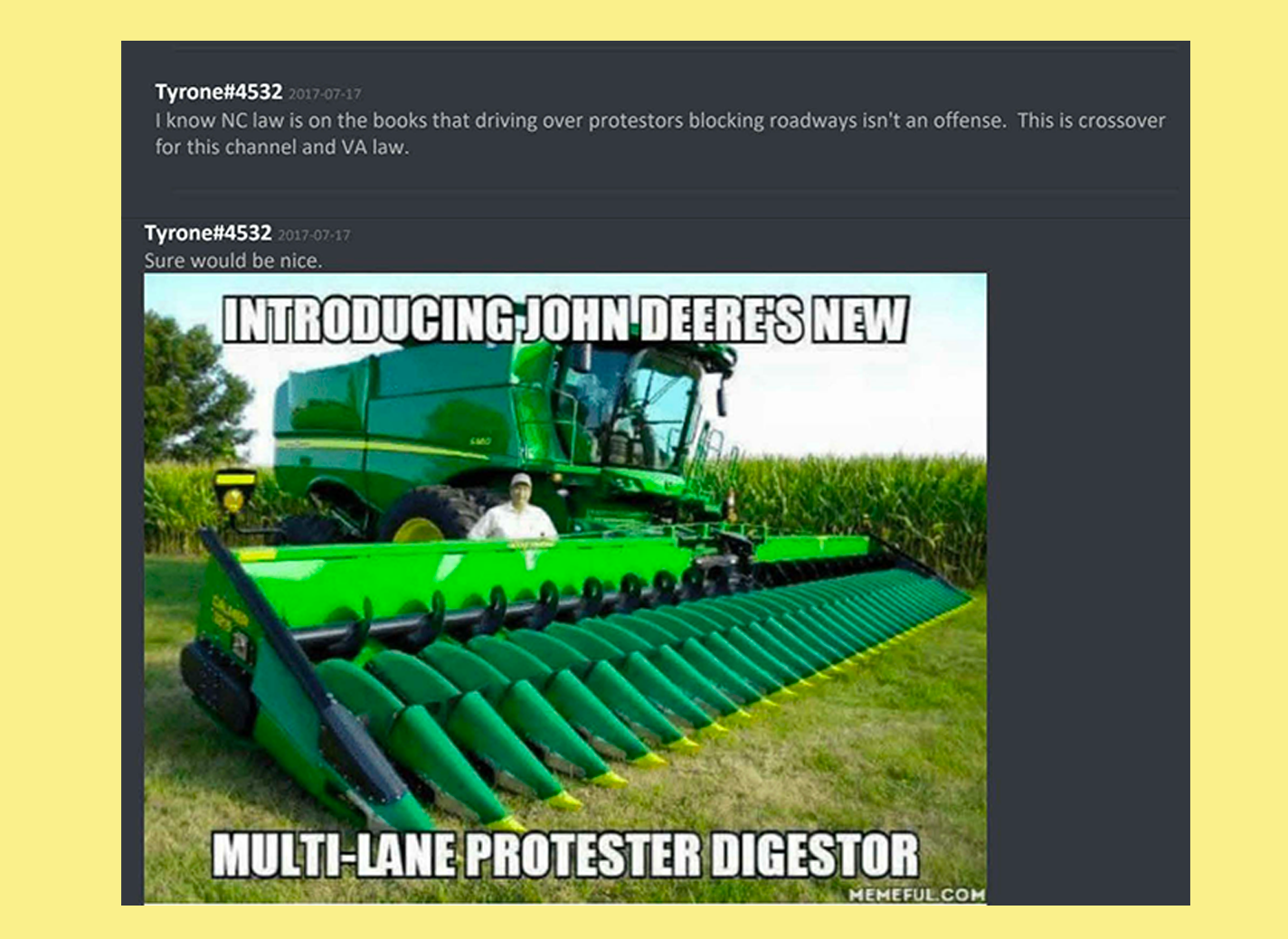 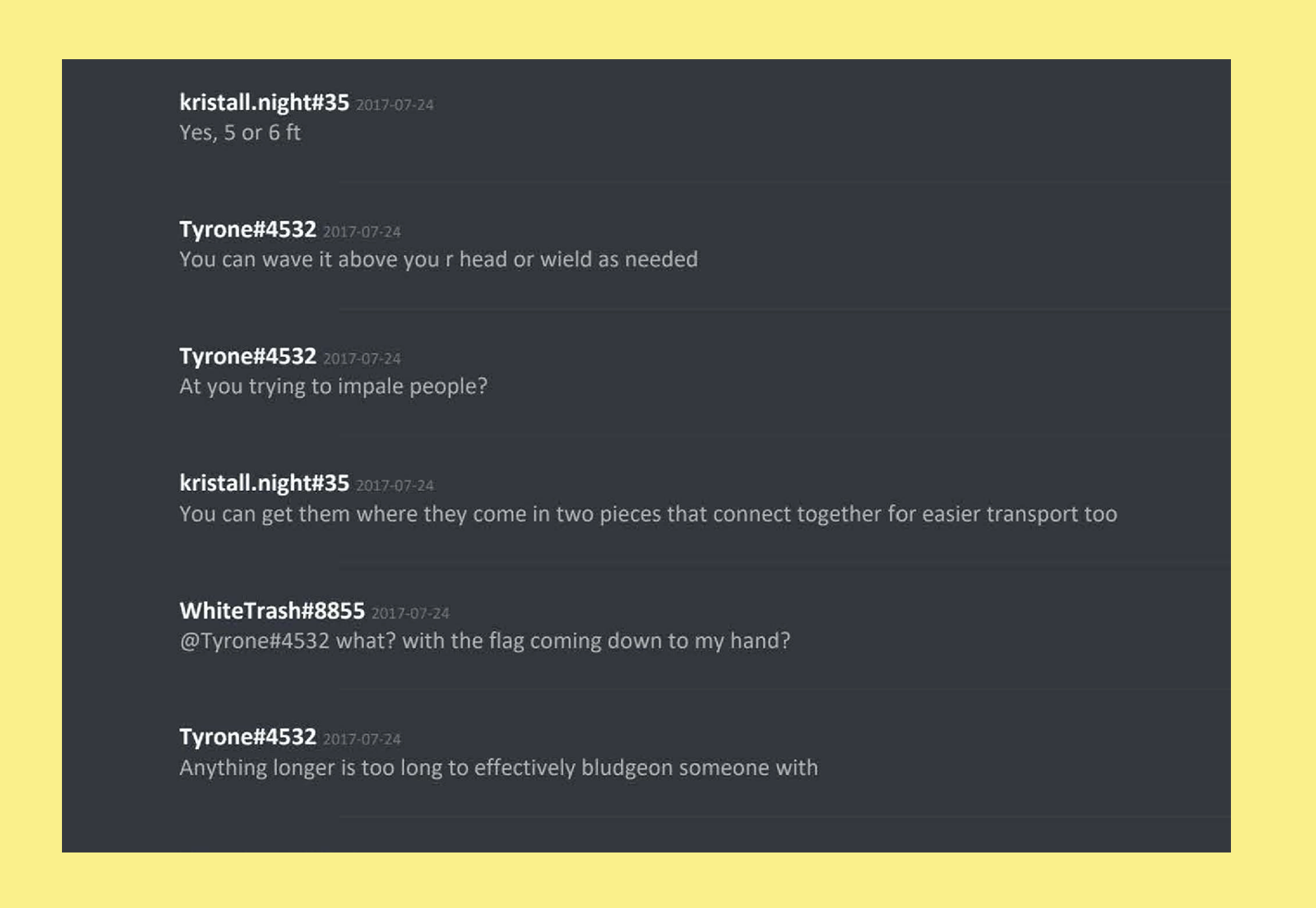 The huge volume of Facebook, Discord, Twitter, and Instagram posts contained in the evidence illustrate how central social media was to the organizing of Unite the Right. These companies are often criticized for refusing to crack down on white supremacist and neo-Nazi activity on their platforms. In plaintiff exhibit 1811, Facebook actually encouraged one of the white supremacist defendant groups to reach more viewers by advertising their post – a series of photos from the torch march where neo-Nazis terrorized students and violently assaulted counterprotesters. 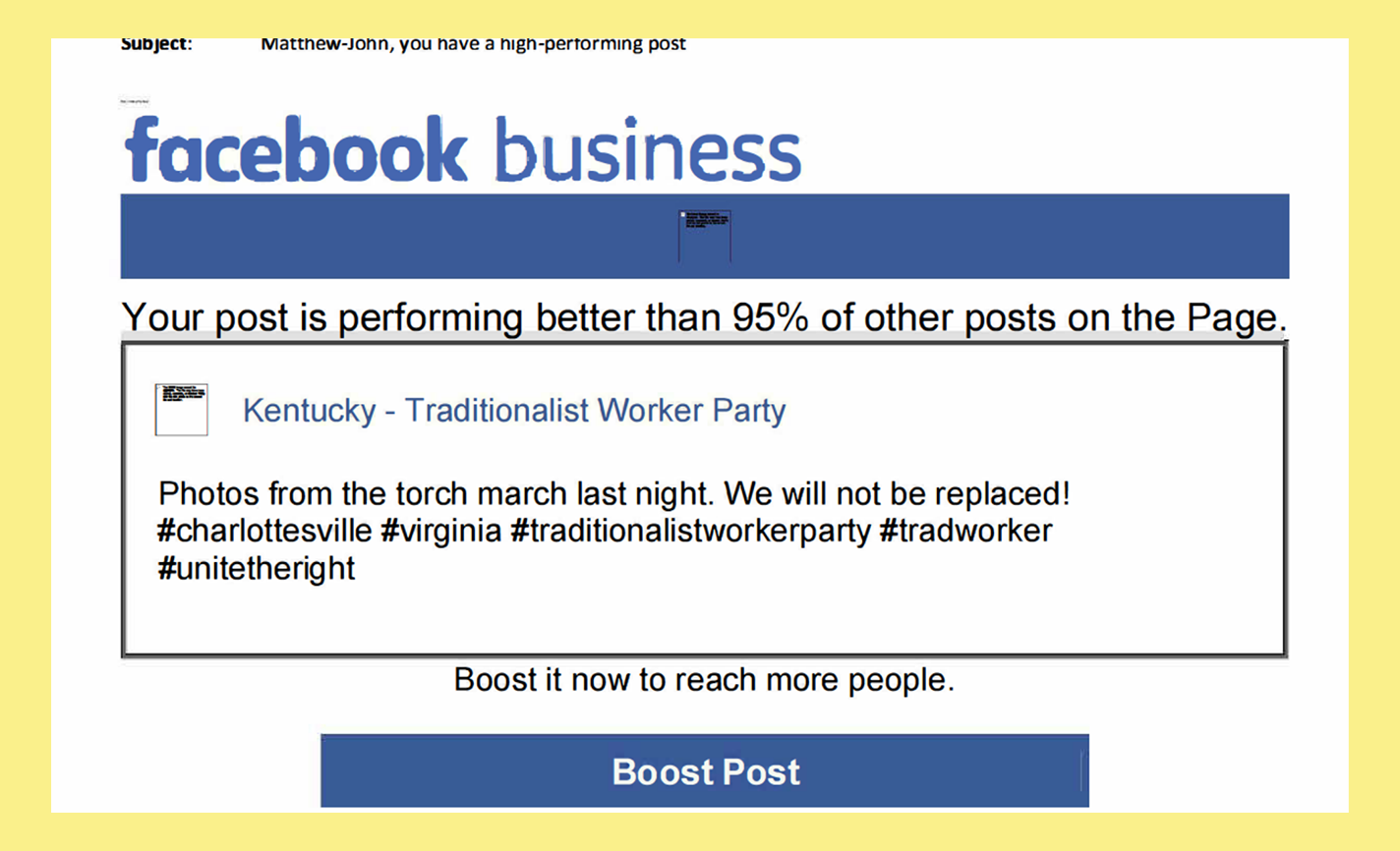 All of that is even more damning given the unfiltered racism, antisemitism, homophobia, misogyny, and celebration of genocide on display in the evidence. Posts were full of violent and racist memes and comments about looking forward to “gassing the k**kes” in Charlottesville. “Next stop Charlottesville. Final stop Auschwitz!” they wrote. 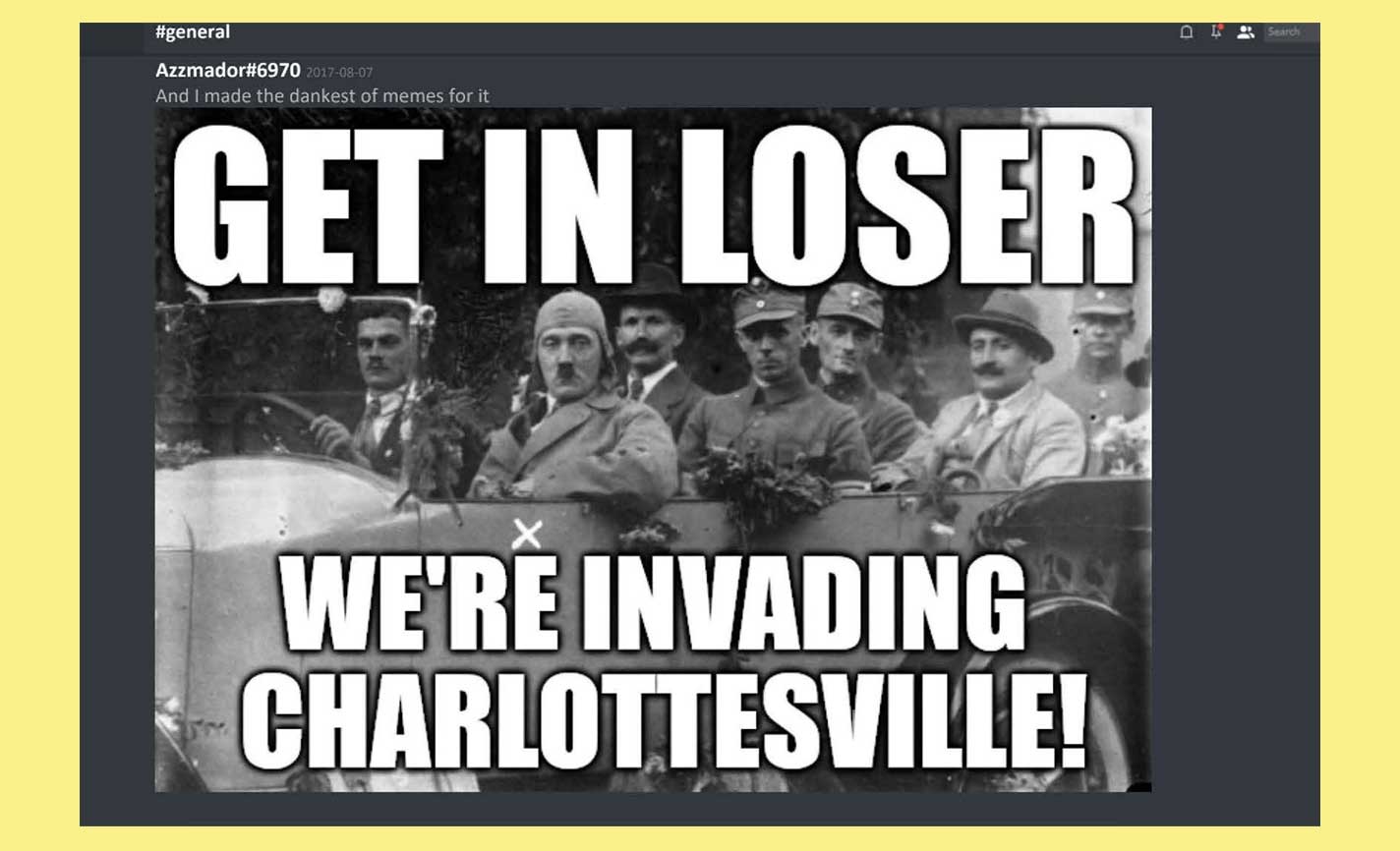 The exhibits also demonstrate that – contrary to the claims of the defendants – they were in constant communication throughout the summer of 2017. The published evidence reveals how closely they coordinated across organizations and how frequently their discussions turned to violence.

And though the defendants claimed to regret the loss of life while they were on trial, the evidence shows their initial reaction was actually triumphant and dismissive of those who were injured and killed. In private and in public, they insulted Heather Heyer, celebrated the violence, and defended James Fields.

The feeling was mutual. The evidence shows that James Fields not only revered many of the event organizers – regularly tagging them in social media posts, including immediately before driving his car into counterprotesters – but that after the attack, the admiration was reciprocated by some of the defendants. In a never before published letter sent to Fields in prison, Matthew Heimbach calls Fields a comrade and a “good man.” The evidence shows Fields believed his co-defendants wanted violence – and their own words affirmed his belief.

Nearly 700 exhibits are included in this release. Evidence that was not published to the jury remains confidential and cannot be shared – but these audio files, videos, screenshots, photos, and other records are the near-entirety of the evidence presented at trial that led to our historic verdict.

The only entered exhibits we’ve withheld are sensitive medical records and supporting medical documents, phone records that would require total redaction, and a handful of videos that could be used by white supremacists to identify and harass individuals not party to the case.

We hope these documents will be useful to researchers, educators and journalists working to understand and explain the truth of what happened in Charlottesville and – most importantly – how we can prevent anything like it from happening again.

The collection and secure storage of the evidence – and the case itself – have been made possible by individual donors and foundations who’ve supported IFA. You can support our work here.