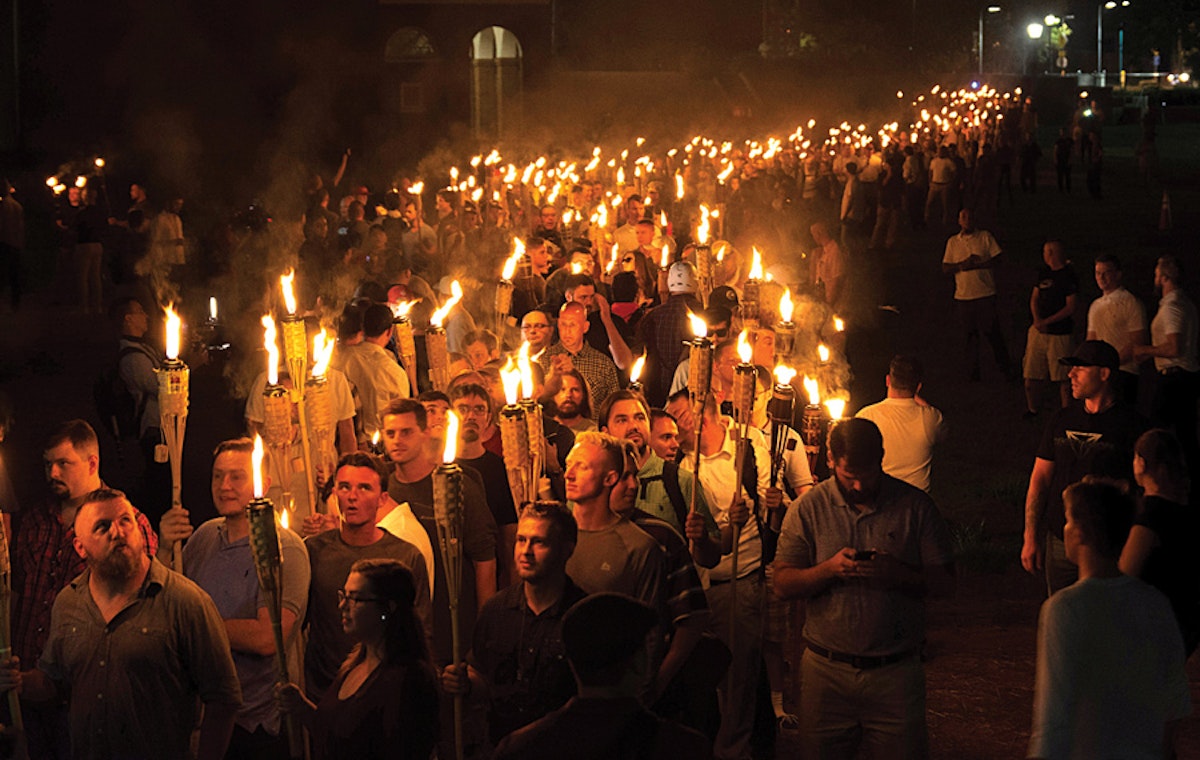 On the night of Aug. 11, 2017, hundreds of white supremacists descended on the streets of Charlottesville, Va., for a torchlit rally at the University of Virginia (UVA), unleashing a weekend of terror through the “Unite the Right” rally. The next morning, then 20-year-old James Fields Jr. plowed his car into a crowd of counterprotesters, killing 32-year-old Heather Heyer and injuring 19 others.

What was branded as a “rally” was really more of a rallying cry for hundreds of neo-Nazis and white supremacists to raid the college town with semi-automatic weapons and launch an all-out race war over the planned removal of a Robert E. Lee statue.

On Oct. 12, 2017, 10 plaintiffs filed a lawsuit in the Western District of Virginia against more than two dozen of the rally’s organizers. The case, Sines v. Kessler, alleges the organizers meticulously plotted a violent conspiracy months in advance of the rally. The plaintiffs represent a group of 10 counterdemonstrators. Elizabeth Sines was a second-year UVA law student at the time. Jason Kessler was the lead organizer of the rally and obtained the permit for
the event.

Helming the plaintiffs’ case is Roberta Kaplan, the lawyer who made history when she defeated the Supreme Court’s Defense of Marriage Act in 2013, paving the way for marriage equality in all 50 states. Now she’s seeking to combat the leadership behind America’s growing white supremacist movement and possibly bankrupt them into obscurity.

The case is set to go to trial in the summer of 2020. Other defendants include Richard Spencer, who coined the term “alt-right”; Matthew Heimbach,  the founder of the now-defunct hate group the Traditionalist Worker Party; and Andrew Anglin, the publisher of the neo-Nazi site The Daily Stormer.

The 112-page complaint provides a glimpse into the chat room discussions the defendants and alleged co-conspirators engaged in months before the riot. According to the complaint, conversations in a private chat room called Discord spoke extensively of specific weaponry to bring, including semi-automatic rifles with shields and armor. Also discussed was whether it was “legal to run over protesters,” dubbing the tactic of plowing through a crowd as a “protester digester.”

Kaplan told the Jewish Telegraphic Agency in June that she sees this case as a once-in-a-generation lawsuit, similar to 1925’s so-called Scopes Monkey Trial in Dayton, Tenn., when high school science teacher John Thomas Scopes was accused of teaching evolution in violation of a Tennessee state law.

Amy Spitalnick, executive director of Integrity First for America, a nonprofit backing the suit, told the Journal, “This case is really indicative of the broader crisis of extremism, anti-Semitism, white nationalism and racism that we’re facing right now.”

While the case is focused on holding the defendants accountable for their actions in Charlottesville, Spitalnick said it “also has the potential to dismantle the infrastructure and leadership at the center of this extremist movement.”

In a 2017 interview on Washington Post blogger Jonathan Capehart’s podcast, Kaplan said Charlottesville was not about free speech. It was about racially motivated violence thinly disguised as a First Amendment protest. “If Nazis or KKK (Ku Klux Klan) or white supremacists just want to stand peacefully on a street corner and hold up a sign saying they hate Jews or they hate black people … that is protected speech,” Kaplan said. “I have no issue with that. But that’s not what happened here.”

That point was emphasized in a federal district court’s 62-page decision issued in July 2018 that rejected the defendants’ motion to dismiss the case on the grounds of First Amendment rights. Senior U.S. District Judge Norman Moon wrote, “The Court concludes Plaintiffs have adequately pled specific factual allegations” and that “much of this conduct was not protected by the First Amendment.”

Kaplan and co-counsel Karen Dunn are preparing their case based on two statutes that date to the Reconstruction era: the Civil Rights Act of 1866 and the KKK Act of 1871, which were created to protect minorities from racially motivated violence in the South.

Kaplan’s team has won a number of court orders since filing the case.  On Aug. 9, a federal court sanctioned the defendants for not complying with orders to subpoena their phones and social media accounts.

One of the defendants, Chris Cantwell, recently lost his attorney after making violent threats  against Kaplan. Cantwell told his followers on the instant messaging app Telegram, “After this stupid kike whore loses this fraudulent lawsuit, we’re going to have a lot of f—ing fun with her.”

“I don’t think that our defendants like the fact that they’re being sued by Jewish women,” Spitalnick said. “That’s something they’ve made clear.”

In the two years since the “Unite the Right” rally, Charlottesville proved not to be an anomaly but a flashpoint foreshadowing a much larger crisis in America’s white nationalist epidemic.

According to a February 2019 Southern Poverty Law Center report, the past two years have seen record numbers of hate groups emerge, and the Anti-Defamation League (ADL) has recorded a surge in right-wing extremism, such as the attack at Pittsburgh’s Tree of Life synagogue in October 2018, which left 11 Jews dead, and the Aug. 3 massacre at a Walmart in El Paso, Texas, in which 22 were killed and was, according to the ADL, the third-deadliest act of right-wing extremism in 50 years.

Both the Pittsburgh and El Paso attacks followed a similar pattern of shooters using online forums to find a community of like-minded people. Each subsequent attack has the potential to inspire the next, with chat rooms becoming a breeding ground for violent extremists.

Those two days of hate in Charlottesville have spawned further violence in the two years since.