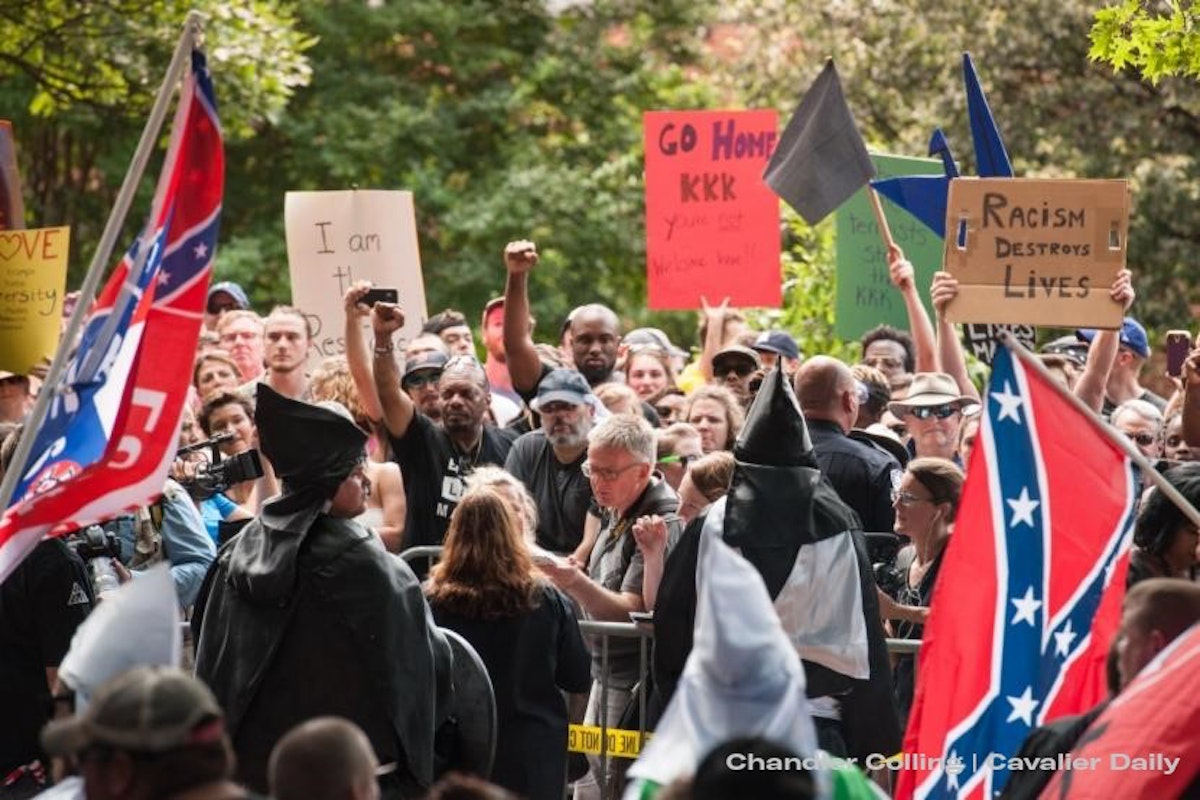 (August 11, 2018)—Newsweek published an article on Sines v. Kessler, the landmark lawsuit that our attorneys filed last year against two dozen neo-Nazis and white supremacists for the violence they organized in Charlottesville, Virginia during the "Unite the Right" rally last year. Newsweek reports:

"This weekend will mark the one year anniversary of the 'Unite the Right' rally and counter-protests that left over 30 people injured and one young woman dead. The event had been violent but then turned deadly when 21-year-old James Alex Fields Jr. drove his car into a crowd. The tragedy highlighted the intensity of America’s racial divide, as white supremacists marched through the town armed with weapons.

48 hours after the dust had settled in Charlottesville, Kaplan was wheels up with her team to meet victims, who would later become plaintiffs in one of the biggest lawsuits to result from the incident. After ten victims had come forward willing to sue the alt-right rally’s biggest organizers—like Jason Kessler and Richard Spencer—Kaplan became aware she needed a helping hand. That’s when she called Karen Dunn, who she had never met before but was a lawyer she admired from afar, asking if she would help her 'sue the Nazis.'"

On the legal strategy in Sines v. Kessler, Newsweek continues:

"The premise of their case is simple: The racially-motivated violence that took place at Charlottesville was carefully, meticulously planned and encouraged by the defendants named in the lawsuit. That coordination broke a law called the Ku Klux Klan Act, which prohibits the conspiring to engage in violence against racial minorities and their supporters.

The act was passed in 1871 to protect the newly freed slaves against mob-like brutality.

Kaplan says it’s both 'sad and ironic' that the law has to be used in 2018. Dunn calls it disheartening and 'shocking.' Even so, the lawyers believe they have the evidence to prove this to be the case.

'They didn’t just happen to show up all dressed the same and marching in the same order, carrying the same weapons. That was coordinated,' Dunn said. Anyone who believes otherwise is extremely naive, they added."

"...Kaplan and Dunn already believe the lawsuit is having positive effects. One of the conspirators accused in the case, Andrew Anglin, has been discouraging people from attending the 'Unite the Right 2' rally this year. In a story written for the neo-Nazi website The Daily Stormer, Anglin tells people that the 'post-Charlottesville marches have no purpose' and that they are 'horribly destructive and they need to stop.'"

Dunn sees their denouncement of the event as a direct effect of the work they are doing on the case. But the real victory will be when they win the trial next year, which they believe they will.

When asked how she feels about the case moving forward to trial, Sines has mixed emotions. She’s happy, of course, saying that she is incredibly proud of the work they are doing to combat white supremacy. She’s terrified, too. She reads what the alt-right says about her online, her Facebook page has been posted on Jason Kessler's website.

'I thought Charlottesville would be enough,' she said. 'We have to do things to make sure that this doesn’t happen again.'"