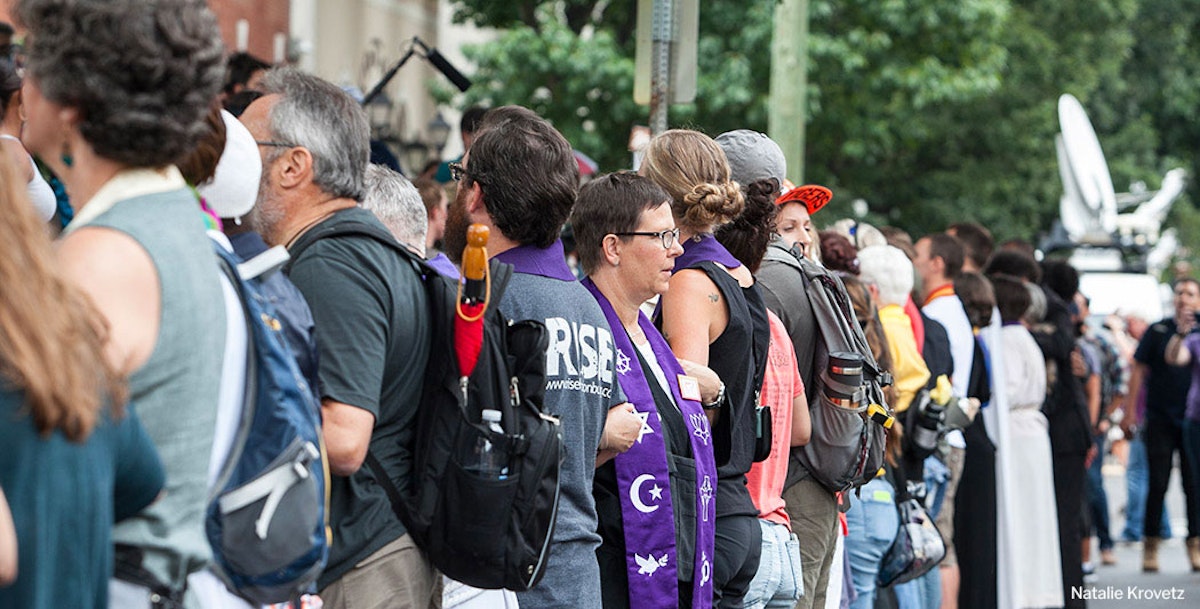 Five years ago today, neo-Nazis and white supremacists stormed Charlottesville. They carried torches and other weapons, bellowed Nazi chants, and brutally attacked residents who dared to stand up to their hate.

Before leaving the city, one of them drove a car into a crowd of counterprotesters – killing Heather Heyer and leaving dozens of others severely injured and traumatized.

Most of us can vividly recall where we were when we learned of the violence. Some of you reading this witnessed the events in person, and were directly impacted. Others saw the violent images on television, as pundits and elected leaders expressed shock that racist violence like this could take place in America, insisting “this is not who we are.”

Of course, we know that the racists who attacked Charlottesville relied on symbols and slogans that have been very much part of America’s past, from the nativist rhetoric of the Nazi-sympathizing America First movement of the 1930’s, to the torches that evoked Ku Klux Klan lynchings, to Confederate flags representing centuries of racial violence.

But in keeping with traditions equally rooted in our history, many saw the violent hate on display that weekend and resurgent throughout our country – the threats to our rights and the safety of our communities – and fought back. Not content with the assurances that this wasn’t “who we are,” people of conscience were energized to fight for the kind of country we’ve always aspired to be.

In the aftermath, when our elected leaders and public officials didn’t rise to the moment, members of the Charlottesville community and people across the country did.

People organized to deplatform the extremists. To raise funds for those who were hurt. To protest white supremacist gatherings.

And through IFA, thousands gave their time, energy, and hard-earned money to help nine people who were injured in the violence take on some of the country’s most notorious neo-Nazis and white supremacists in court – and win.

Because of the bravery of our nine plaintiffs and the support of so many, this will be the first anniversary of the deadly violence that follows a historic verdict in which those responsible were finally held to account.

Because so many chose to stand up to their hate, brutal neo-Nazi groups have been dismantled. White power leaders have gone bankrupt.

The legal victory in our Charlottesville lawsuit sent a message to the entire white supremacist movement that there are consequences for violent hate.

And it conveyed another, perhaps even more important message, to the vast majority of Americans on the side of tolerance, justice, and inclusive democracy. Extremists want us to feel powerless. What we accomplished together in this case proves we are not.

It’s vital we remember our power today, because our fight is far from over. In fact, the broader crisis we face has only deepened as extremism becomes more normalized, seeping into the mainstream of our media, politics, and society.

In the past year alone, we’ve seen members of Congress and state-wide GOP officeholders show up to a white nationalist conference hosted by Unite the Right attendee Nick Fuentes. A secessionist former leader of a hate group found liable in our Charlottesville suit just became the GOP nominee for Maryland Attorney General – one of many candidates on the ballot this November with direct ties to extremist groups. Pundits and politicians have amplified the same racist conspiracy theory behind the “Jews will not replace us” chants in Charlottesville – and that theory has fueled a cycle of deadly attacks, most recently in Buffalo, NY.

Draconian policies targeting women and people who can become pregnant, LGBTQ+ people – especially trans and non-binary youth – and communities of color have been introduced and implemented across the country.

These threats to our rights, our safety, and our democracy are massive and daunting. But the choice before us is the same as it was five years ago: Do we stand up to the extremists and fight for our vision for what this country can be, or do we stand idly by and hand them the power to impose theirs?

On August 11th and 12th, 2017, Charlottesville community members, many who didn’t consider themselves activists, made the choice to stand up. To chants of “blood and soil,” they responded “no fascist USA.” To calls for race war, they responded with interfaith and multiracial solidarity, marching arm in arm.

And when the fascists vowed “we will return” – our plaintiffs and thousands of IFA supporters helped ensure it wasn’t to another violent rally on the streets of Charlottesville, but to a Charlottesville courtroom, where they were ultimately defeated.

This anniversary reminds us of the danger of complacency in the face of extremism - a reminder we hardly need given all that’s happening in our world. But we must continually remember another profound lesson from Charlottesville: When we come together, recognize that our rights and safety are intertwined, and make the choice to stand up to the extremists at every turn, we can prevail.

So today, let’s recommit to the fight.