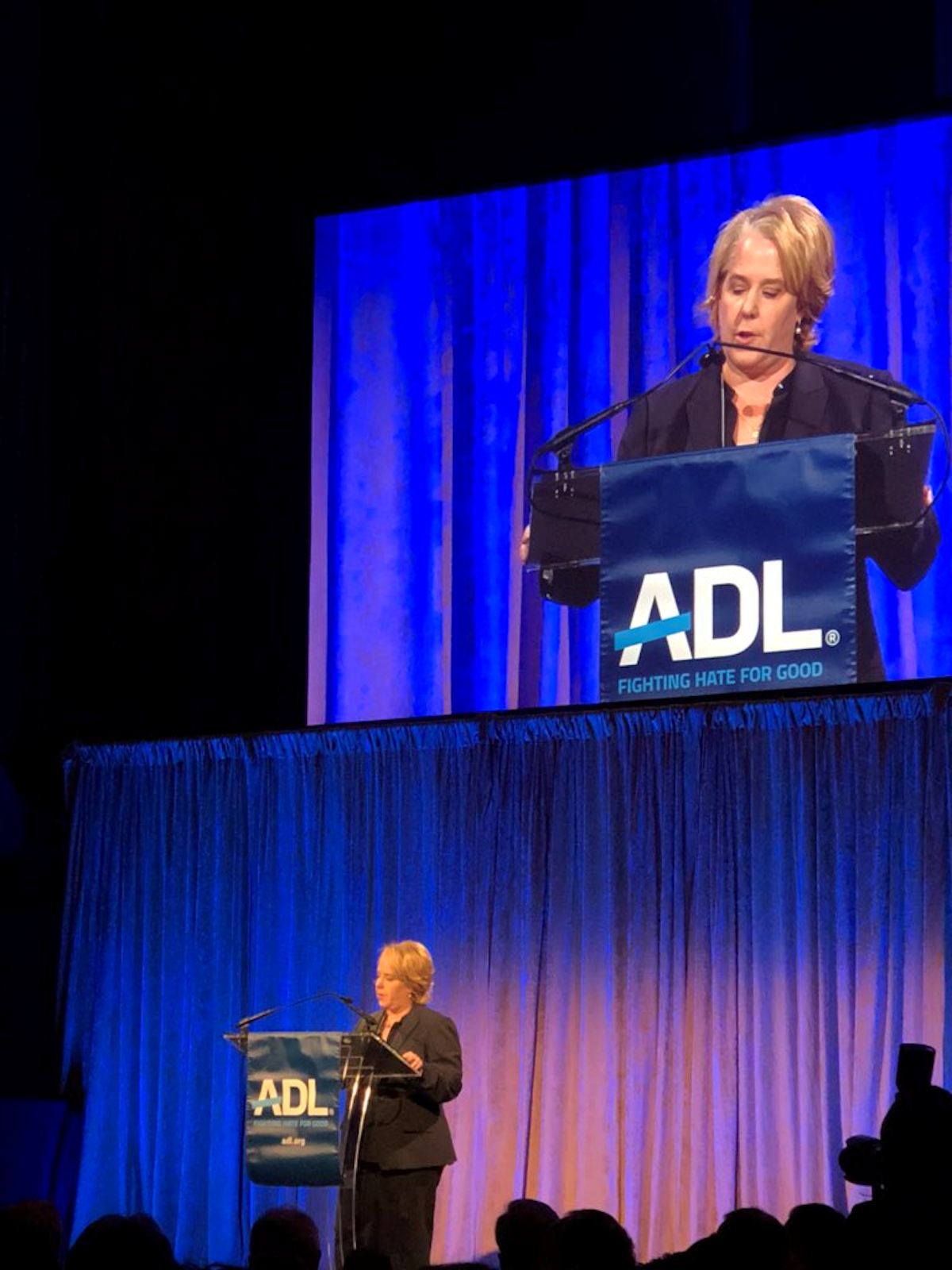 Last night, our lead attorney, Roberta Kaplan, was honored by the Anti-Defamation League, the nation’s oldest organization fighting anti-Semitism. In her acceptance speech, she outlined why the fight for justice in Charlottesville is so urgent. Below are her remarks:

“In September 1930, the Nazis in Germany had just secured the second-largest number of seats in the Reichstag.  It was a staggering victory for Adolph Hitler.  And yet there were many Jews who did not seem particularly troubled by the result.

One such person was Sigmund Warburg.  He was a prominent, wealthy, German businessman who also happened to be Jewish, famed for his integrity and good judgment.  And, to play the game of Jewish geography, he also happened to be the father of the husband of my mother-in-law’s sister.  As Niall Ferguson notes in his biography of Warburg, after the 1930 election, Warburg showed characteristic optimism:  “[O]nce they are in government,” Warburg wrote, “they will immediately become, first, more sensible and, secondly, once again less popular.”  Both predictions, of course, could not have been more wrong.

Warburg’s statements were written almost a century ago—in a different place and at a different time.  The Nazis rose to power in a different political environment.  They didn’t have our laws, courts, or the United States Constitution.  The events of the Holocaust took place in Europe:  a place with a long and storied history of political extremism and antisemitism.  Conspiracies to commit violence against despised groups could not happen to us here like it happened there.

Or could they?  Just over a year ago, hundreds of neo-Nazis, Klansmen, white supremacists, and white nationalists from across the country descended upon the college town of Charlottesville, Virginia.  People of color, immigrants, LGBT people, Jews and their supporters were all singled out as targets for violence.  And violence there was, including the death of Heather Heyer.

Perhaps the most significant aspect of what happened in Charlottesville is that it was no accident.  Months of planning and careful coordination were involved.  My law firm, Kaplan Hecker & Fink, together with Karen Dunn of Boies Schiller, decided that something had to be done to fight back.  But because we are lawyers and not Nazis, we decided to fight back, as we should, in a court of law.

The plaintiffs we represent include:  Seth Wispelwey, a Christian pastor who joined other clergy, including rabbis, in singing hymns, locking arms, and kneeling in prayer in the face of white supremacists and Marcus Martin, who pushed his then-fianceé out of the way of an assailant’s car and was struck himself, sustaining serious injuries, as depicted in the Pulitzer Prize-winning photograph.

When we filed suit last fall, we were not fully aware of the extent of the dark forces at play—nor the singlemindedness of the extremists’ hatred.  As defendant Andrew Anglin posted on the Daily Stormer website during the events on August 11-12: “Someone is getting gassed! My guys on the ground can’t see who – LET’S HOPE IT’S JEWS!” Defendant Christopher Cantwell agreed: “Let’s . . . gas the k*kes and have a race war.”  The chants that rang out on the University of Virginia campus on August 11, 2017 speak for themselves: “Blood and Soil” and “Jews will not replace us.”

Three days ago, violence came again.  A community in Pittsburgh gathered together to pray in schul on Saturday morning, just as they do every Shabbat.  A gunman—whom we now know to be Robert Bowers—burst into the synagogue with a semiautomatic weapon and fired off rounds of bullets into the congregation, murdering eleven Jews while they were davening. It’s no surprise that the Pittsburgh shooter ran in the same circles as the defendants in our Charlottesville case, and communicates with them on the far-right social networking service Gab, which was recently shut down, hopefully for good.  Gab.com is a social network that advertises itself as an alternative to Twitter and Facebook in the sense that it does not prohibit any speech, no matter how violent, threatening, or hateful.  In one message on Gab, the Pittsburgh shooter tagged Brad Griffin, who’s affiliated with one of the defendants in our case, The League of the South.

Not surprisingly, these groups have been active on Gab attacking me and our lawsuit. They say things like: “In the oven kike dyke, no antisemitism without semitism.”  Or, even more menacingly, in an apparent tribute to Henry II who supposedly said of the Archbishop of Canterbury before his assassination, “Will no one rid me of this meddlesome priest” -- “Something needs to be done about Robbie Kaplan.”

During the course of the lawsuit, we even had to fight a motion by an unnamed woman, who uses the horrifying handle “kristall.night” on yet another server used for planning the violence in Charlottesville.  That woman’s handle, of course, evokes with pride the unspeakable pogrom that occurred in Nazi Germany 80 years ago this month, resulting in the murder of hundreds of Jews, the vandalization of their homes, and the desecration of centuries-old synagogues and cemeteries.

Let me be clear:  while the men who planned Charlottesville and the murderer of Pittsburgh truly hate people of color, immigrants, LGBT people and others, the single passion that motivates and inspires them the most is anti-Semitism.  It is obvious from the online harassment against me, all of which focuses not on the fact that I’m a lesbian, or a New Yorker, or even a Hillary Clinton supporter, but on the fact that I am Jewish. Just this morning, and old friend tweeted that “sadness is listening to the [New York Times daily podcast] and your seven-year old asking you what `Jews will not replace us’ means.”

Unlike the Jews of Germany, we must fight back.  And its not like we don’t know how to do so.  Lawsuits like the one we filed have already been effective at stemming the tide of organized white-supremacist violence.  When Defendant Jason Kessler planned Unite the Right 2 for the anniversary of the violence in Charlottesville this past August, each of the other key leaders named as defendants in our case refused to support or attend the rally, citing our lawsuit as the reason.  Defendant Andrew Anglin, for example, counseled his followers to stay away because it turned into a “circus show for the k*kes” and “we get blamed” for the violence.

But the fight is not easy.  It requires courage.  And persistence.  And determination.  And it requires money.  One of our largest expenses to date has been the cost of keeping all of us safe. It’s not inexpensive. For example, when we traveled down to Charlottesville to argue the motion to dismiss, Karen and I and our teams had to have professional security guards there protecting us.  We continue to receive truly scary threats online on an almost daily basis.

Some of you may know that our lawsuit is supported by a nonprofit organization known as Integrity First for America—or IFA.  IFA believes that those responsible for the violence on August 11 and 12, 2017, must be held accountable; it made a commitment to support the people of Charlottesville, including the members of the Charlottesville synagogue, Beth Israel, to fight back against hate.  But now, we need your help as well.

Sigmund Warburg saved himself, his wife and children.  The legend in our family is that he knew it was time to leave Germany when the German Finance Minister refused to meet with him anymore. Obviously, millions of other Jews were not so lucky.

We can never take the collective security of the Jewish people for granted ever again.  Last year was Charlottesville.  A few days ago, 11 Jews were murdered while praying in Pittsburgh.  The violence can and will happen again—here in the United States—unless, unlike Sigmund Warburg, we face reality and take action to make it stop.’”

That’s exactly what Integrity First for America has been doing in our lawsuit against the neo-Nazis who attacked Charlottesville. But we need your support in this fight -- will you donate today, and then share our case with your friends and family?