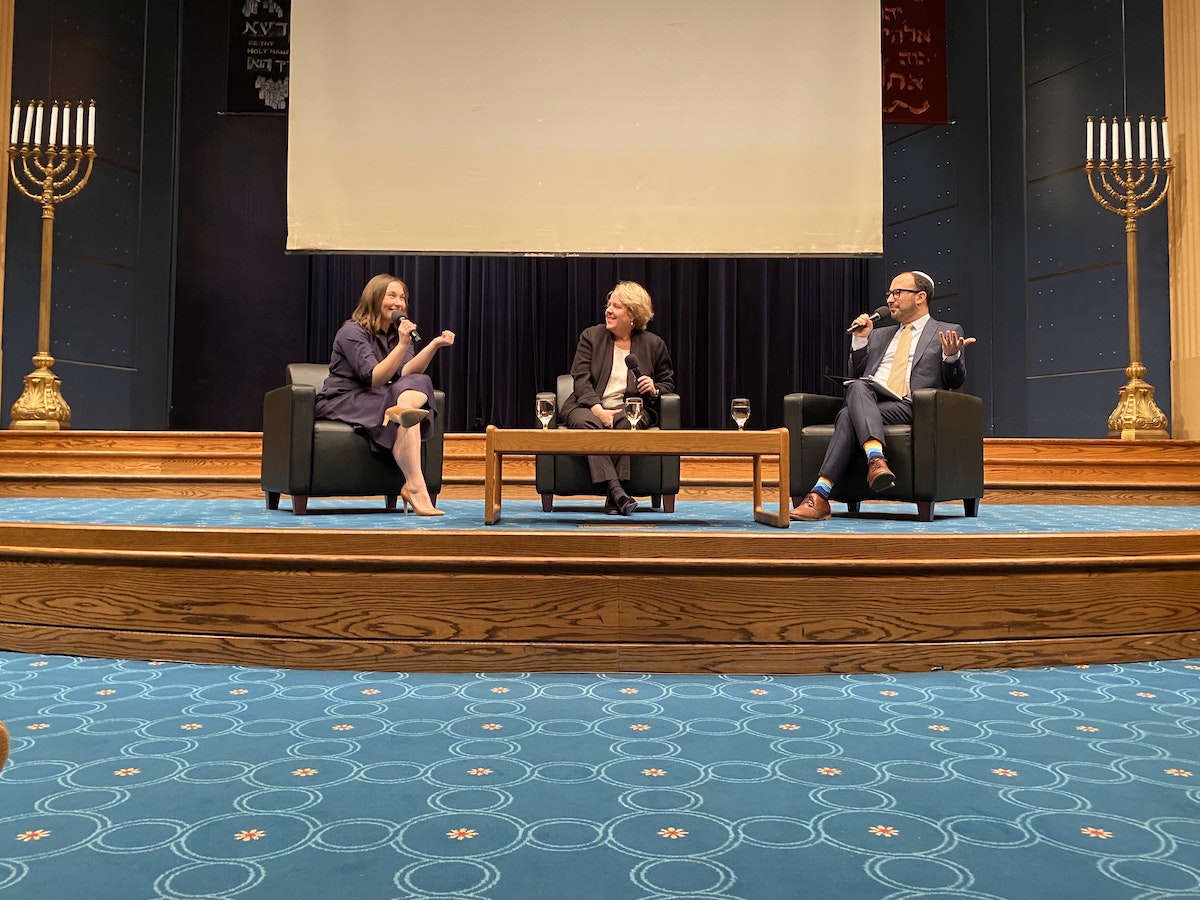 The Jewish News of Northern California published a story on IFA's event at Congregation Emanu-El in San Francisco:

When Rabbi Rachel Schmelkin of Congregation Beth Israel in Charlottesville heard neo-Nazis and white nationalists were coming to her town, her community spent weeks preparing the synagogue for potential violence.

They conducted security assessments. They hired a guard. They also hid away a Torah scroll that had survived the Holocaust and was now, they feared, under threat again.
“It was really dangerous to be on the streets,” Schmelkin said of the “Unite the Right” march and related events that took place in August 2017.

The Aug. 12 march in particular was well covered by the national media. Men with Nazi flags chanted “Jews will not replace us” and the old Nazi slogan “blood and soil” as they clashed with counter protesters. The violence came to a head when a man intentionally drove his car into a crowd, killing 32-year-old Heather Heyer.

Not as well known are the attorneys now bringing these white nationalists to court.
In a case that could have far-reaching implications for the right-wing violence America has faced in recent years, renowned attorneys Roberta Kaplan and Karen Dunn are suing the organizers of the Charlottesville march in federal court.

Their aim is to bankrupt the movement and send a clear message to others who may try to commit similar acts of violence: You will face detrimental legal and financial consequences.

I think, frankly, the trial will be a breeze.

The case is being financially backed by Integrity First for America, a nonprofit headed by Amy Spitalnick, who is Jewish and the granddaughter of Holocaust survivors.

Kaplan, who also is Jewish, and Spitalnick spoke at Congregation Emanu-El on Nov.13 about their suit, which was filed two years ago and is expected to go to trial next fall.

While wiping out the finances of these groups and individuals is key to their plan, Kaplan said she thinks the case can also play a part in helping prevent more right-wing violence. “When there are very serious consequences to someone for doing something illegal, hopefully, that should deter other people from doing it,” she told J. in an interview.

Within days of the 2017 Charlottesville march, Kaplan was there in Virginia meeting with people who had witnessed the violence. “I have pretty thick skin,” she said. “I don’t think I’d ever encountered a community in both a state of fear and grief.”
Kaplan is best known for her win in United States v. Windsor in 2013, where the Supreme Court declared elements of the Defense of Marriage Act, passed overwhelmingly by both houses of Congress and signed into law by Bill Clinton in 1996, unconstitutional.

Some of the people Kaplan spoke with in Charlottesville eventually became her 11 plaintiffs in the lawsuit, Sines v. Kessler; that group includes some injured by Fields’ car and others who experienced violence. Her legal theory — based on the Ku Klux Klan Act of 1871, a law passed by Congress that successfully combated violence against recently freed slaves — is that the Charlottesville organizers meticulously conspired to harm people through their marches.

“If they had just gone to Charlottesville and peacefully stood on the corner with swastikas on their arms, yelling that Jews should go back to the ovens,” Kaplan continued, “they have a right to do that. But that is not what they did.”
The defendants in the case are a mishmash of alt-right, neo-Nazi and white nationalist leaders and groups who organized the Charlottesville march, including American neo-Nazi headman Richard Spencer, some Ku Klux Klan affiliates and the Traditionalist Worker Party, among others.

After the case was filed on Oct. 11, 2017, Dunn was brought on board from the elite firm Boies Schiller Flexner (Dunn was unable to attend the Emanu-El event). Kaplan then approached Spitalnick, who agreed that her group would help fund the lawsuit. It has already cost millions of dollars, much of it supplying security for the plaintiffs and attorneys, Spitalnick said.

Over the summer, the legal team filed sanctions against defendant Christopher Cantwell, a lead organizer in the Charlottesville marches who is known as the “Crying Nazi,” after he made threatening remarks about Kaplan.

So far, things seem to have gone in the plaintiffs’ favor. In July 2018, a court rejected the defendants’ motion for dismissal. A couple of months later, defendants were ordered to hand over their social-media accounts and electronic devices.
Said Kaplan, “I think, frankly, the trial will be a breeze.”

Spitalnick says that other violent right-wing attacks, including the Tree of Life and Poway synagogue shootings, show just how important their case is and the interconnectedness of the problem they are facing.

“Charlottesville was a flash point,” Spitalnick told J. “It wasn’t an isolated incident. [It is] part of this broader cycle in which each attack is used to inspire the next. And if we don’t understand that, we aren’t going to break the cycle.”