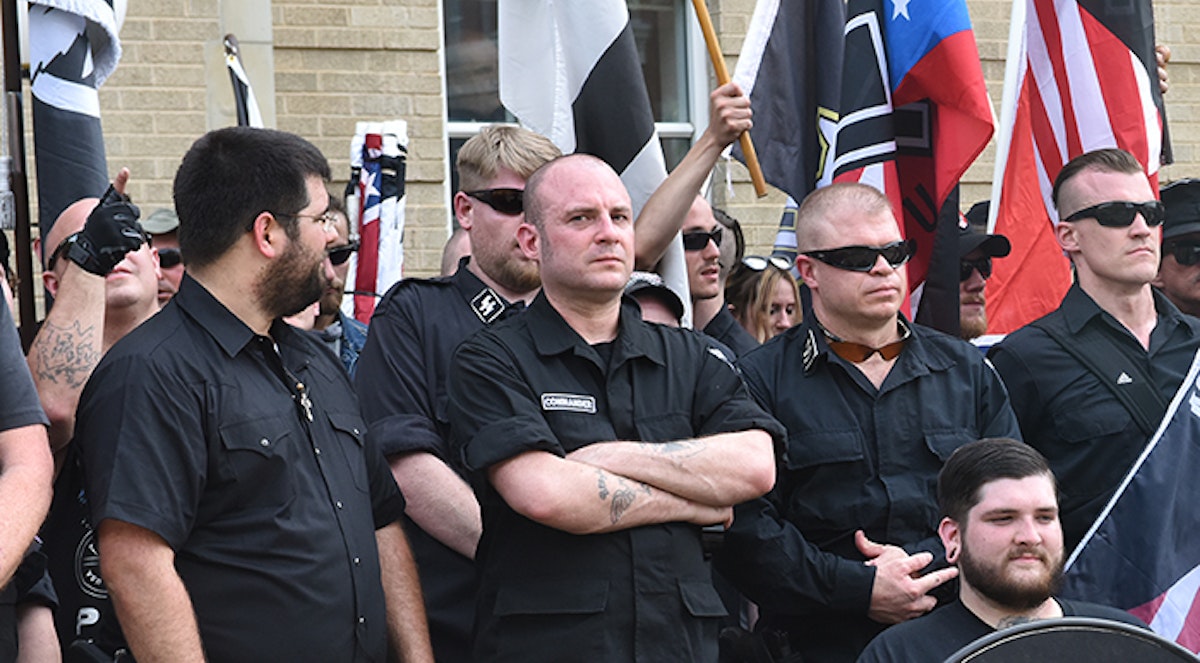 Former NSM leader and other neo-Nazi defendants try to avoid accountability in Sines v. Kessler, the federal lawsuit backed by IFA against those responsible for the August 2017 violence

Schoep has only produced gibberish and other non-responsive documents since January 2018; sworn testimony by current NSM commander reveals Schoep continues to communicate with neo-Nazi group – including making new discoverable communications – despite claims to have left the movement

“Like many of his co-Defendants, Schoep’s conduct in this litigation reflects a pattern and practice of resistance, recalcitrance, and outright defiance of Court orders and Schoep’s discovery obligations,” the motion states.

“After refusing for more than a year to produce anything to Plaintiffs, Schoep did the minimum possible to attempt to avoid [further] sanctions.  Even then, the cellular phone that Schoep provided (which he admitted he had used to communicate regarding Unite the Right) was water-damaged, and its contents unrecoverable, because it had allegedly fallen in a toilet.  Now, despite being in the possession of another electronic device containing unquestionably responsive documents—his new phone—Schoep, through his counsel, W. Edward ReBrook IV, has repeatedly refused to produce that device to Plaintiffs.”

Schoep and NSM were key organizers of the Unite the Right violence in Charlottesville over August 11 and 12, 2017. The lawsuit backed by IFA details how the defendants meticulously planned the violence for months in advance (including via social media and other online channels).

The plaintiffs first served Schoep with discovery requests in January 2018. Since then, he has “done everything in his power to avoid complying with his discovery obligations—in fact, Schoep produced nothing at all until after Plaintiffs moved for sanctions against him.”

In April 2019, the court sanctioned Schoep and ordered him to immediately turn over critical evidence; yet Schoep and his attorney still have barely produced anything. While over 22,000 files on Schoep’s computers and accounts matched the agreed-upon search terms, only 100 documents were produced to plaintiffs – either unreadable gibberish files with no substance, case filings and correspondence, or Google Alert notifications. At the same time as he was producing this trickle of non-responsive documents, plaintiffs became aware that he was also sitting on a trove of other responsive and discoverable material, including a new cell phone.

Schoep has also repeatedly claimed that he’s left NSM and the white supremacist movement. Yet the motion quotes sworn testimony by current NSM commander Burt Colucci, revealing that “Schoep has simultaneously remained in steady communication with Colucci throughout this litigation from his new phone, including making discoverable communications regarding topics relevant to this litigation.” Plaintiffs are seeking those communications, including text messages and telephone records regarding Unite the Right, from the previously undisclosed phone—none of which were produced to the plaintiffs or to the third-party vendor for imaging.

“Our plaintiffs won’t allow these neo-Nazis and white supremacists to avoid accountability for the racist violence they brought to Charlottesville,” said IFA Executive Director Amy Spitalnick. “We’re committed to bringing them to justice for their actions.”