Trial is officially underway in our lawsuit against the white supremacists, neo-Nazis, and hate groups that organized the Unite the Right violence. After three days of jury selection, opening arguments were presented Thursday, followed by powerful testimony from two of our plaintiffs on Friday.

You might already know some of that. Because over the past week, our Charlottesville case has received around-the-clock coverage on virtually every network and cable news channel and in every major domestic newspaper.

The widespread attention is a testament to the incredibly strong case our plaintiffs have built -- thanks in no small part to your support -- over the past four years.

It’s a case, as lead attorneys Robbie Kaplan and Karen Dunn outlined in their opening statement, about violence and hatred -- and about justice and accountability.

Accountability for the defendants, who conspired to commit racially-motivated violence. And justice for the plaintiffs, who they targeted. This week has brought us one step closer to achieving those goals. Read on for a recap of what happened.

If you missed our plaintiffs’ opening statement, know that it was an absolute tour de force.

Attorney Karen Dunn explained to the jury that plaintiffs would demonstrate how racially-motivated violence was “planned, executed, and celebrated by the defendants.” In just ninety minutes, the attorneys presented clear, disturbing, and heartbreaking evidence of all three, as they laid out the story of the Unite the Right "Battle of Charlottesville."

Kaplan concluded by telling the jury, “The evidence you will see over the next few weeks will be overwhelming. By the end, it will be clear that the defendants conspired to commit racially-motivated violence and devastated the lives of our clients.”

The evidence presented in the first 90 minutes alone was overwhelming. But it was just the start. 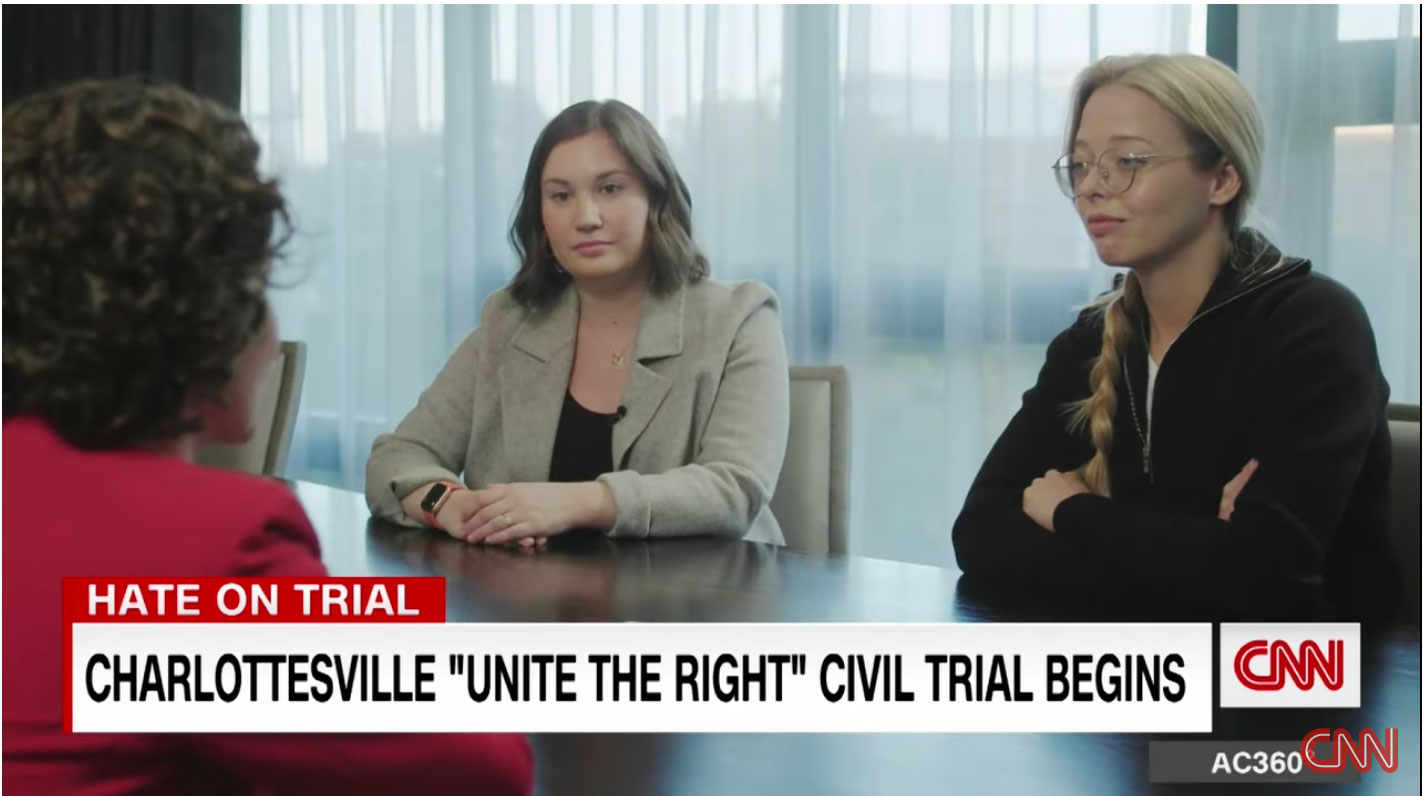 You’ve likely seen or heard some coverage of the trial this week. It led The New York Times U.S. News section, and was featured on the front pages of the Washington Post and USA Today. If you turned on NPR or the evening news, you likely heard about our landmark case.

Here are some top stories featuring interviews with, and quotes from, Executive Director Amy Spitalnick and our legal team:

For those interested in the defense’s opening statements (which were pretty much exactly what you’d expect), read Buzzfeed’s story, “White Supremacists Used Racist Slurs And Cursed In Bizarre Opening Statements For The Charlottesville Trial.”

The first plaintiffs take the stand

As our attorneys provided background on the plaintiffs and the horrors they endured in an emotional portion of the opening arguments, they told the jury: “It will be very difficult for the plaintiffs to recount what happened. But they’re going to take the stand and tell you about some of the worst moments in their lives.”

Natalie Romero, an undergrad at UVA at the time of Unite the Right, was the first plaintiff to do so, Friday morning. She recounted her horrific experience, beginning with what happened to her and fellow undergrad and plaintiff Devin Willis, when tiki torch-bearing neo-Nazis stormed their campus.

As the white supremacists surrounded the counterprotesters that night, Natalie -- a Colombian American -- and Devin -- who is Black -- were targeted with racist abuse and violence. Devin testified later in the day (he’ll continue on Monday) that the two were doused in pepper spray and had tiki torches hurled at them. He said he believed he was going to be burned to death.

Romero shared how she was targeted for further abuse on Saturday, pushed into a car, and spat upon. Then, she recounted the car attack by defendant James Fields that fractured her skull and injured her legs so severely that she woke up in the hospital asking if she’d ever walk again.

She did regain her ability to walk, but the injuries impact her ability to exercise, to concentrate, to read. The extent to which they continue to affect her became apparent when she noted that even as she gave her testimony, the brightness of the lights and even looking at the paper in front of her were triggering headaches.

It was a powerful day of testimony. Natalie and Devin willingly relived some of the darkest moments of their lives -- face to face with some of the white supremacists responsible for their trauma -- in order to ensure that they are held accountable.

It is an honor for all of us at IFA to be able to support them.

Trial resumes Monday at 9am ET, with additional testimony from plaintiffs, defendants, and expert witnesses. The experts’ reports on the antisemitism and white supremacy that fueled Unite the Right, the car attack, and the tools and tactics of extremist movements are available here. And information on how to follow what's happening in the courtroom can be found here.