Explosive testimony this week exposed the culture of violence around Unite the Right and left little doubt that the bloodshed in Charlottesville was exactly what the organizers wanted.

Online and offline conversations leading up to Unite the Right were full of racist incitement, calls to violence, discussions of hitting protesters with cars, and specific tips for provoking counterprotesters so that participants could claim self-defense.

The leader of one defendant group testified it was obvious that violence was imminent: The murder and injuries, he said, “shouldn’t be a surprise to anyone.”

As our plaintiffs begin to wrap up their case, they’ve done exactly what they pledged at the start of this trial: provided overwhelming evidence that the defendants conspired to carry out racially-motivated violence in Charlottesville.

You can help our plaintiffs finish strong -- and safely -- by chipping in today.

Much of the evidence in this trial has required little deciphering. When defendants praise Hitler, drop the N-word in open court, or declare “race war now,” their motivations and intentions are pretty transparent.

Other evidence is highly coded, or shrouded in doublespeak. Throughout the trial and in depositions, defendants have claimed that their violent rhetoric and plans are merely online humor. The phrase “just a joke” has been repeated over and over again.

This week, our expert witness Professor Peter Simi explained to the jury that such tactics are classic emblems of the white supremacist movement -- used internally to normalize violence and outwardly to create plausible deniability. “For any culture where violence is central,” he testified, “the more you can normalize it, the easier it is for members of that culture to commit violence.” And while “they may laugh” as they talk about gassing Jews or while sharing memes about murdering Black people, “it is a sincere expression of their ideology.”

“utilized white supremacist movement tactics, principally the reliance on racial animus as a motivator, the intentional use of violence to achieve their goals, and a coordinated strategy to obfuscate their aims through the use of ‘double-speak’...”

On the stand, Simi walked the jury through examples of these tactics, demonstrating how defendants' “just joking” disclaimers were intentional obfuscations of their very real violent intentions.

“Most people are not comfortable with material that comes across as…. nonironic hatred,” Simi read from the Daily Stormer style guide used by a number of Unite the Right organizers, “[so] the unindoctrinated should not be able to tell if we are joking or not... This is obviously a ploy and I actually do want to gas the k*kes.”

The jury heard testimony from a number of co-conspirators, which painted a clear picture of the ultra-violent nature of Unite the Right. The witnesses used the servers created by the UTR organizers to plot violence -- often in chats involving the defendants themselves -- and then traveled to Charlottesville to execute their plans.

“We Are All on Basically the Same Page." -- Testimony From the Defendants.

Among the defendants to testify this week were members of the Nationalist Front -- an umbrella organization for hate groups, including defendants League of the South, Traditionalist Worker Party, National Socialist Movement, and Vanguard America. The coalition was key to recruitment efforts for Unite the Right, and at the center of the violence. 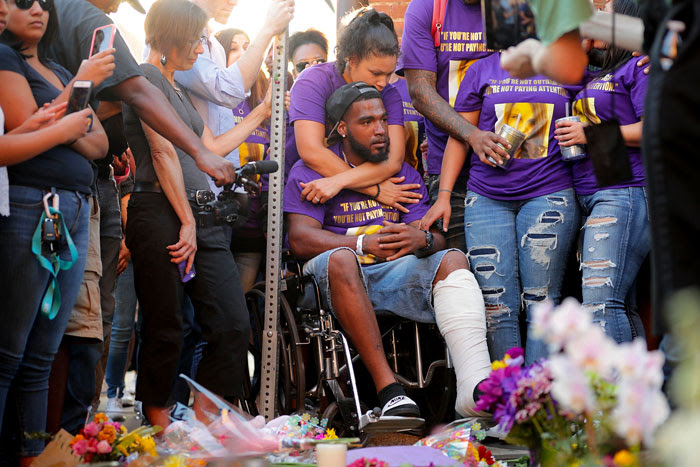 Marcus Martin and Marissa Blair at the memorial for Heather Heyer

Six of our incredible plaintiffs testified this week, recounting the traumatic events of August 11 and 12 that upended their lives. It’s impossible to give each of the plaintiffs their proper due -- we could write volumes about how much we admire them. But here’s a brief recap:

Monday will begin with defendant Jeff Schoep back on the stand. The defendants will start presenting their case Monday, but our plaintiffs’ case remains open ahead of testimony from defendants Jason Kessler and Christopher Cantwell.

We’ve seen over the course of this trial that these defendants and their supporters will use every opportunity to spread their extremist ideology. For us, this only affirms the urgency of holding them accountable and sending a clear message: there will be real consequences for violent hate.