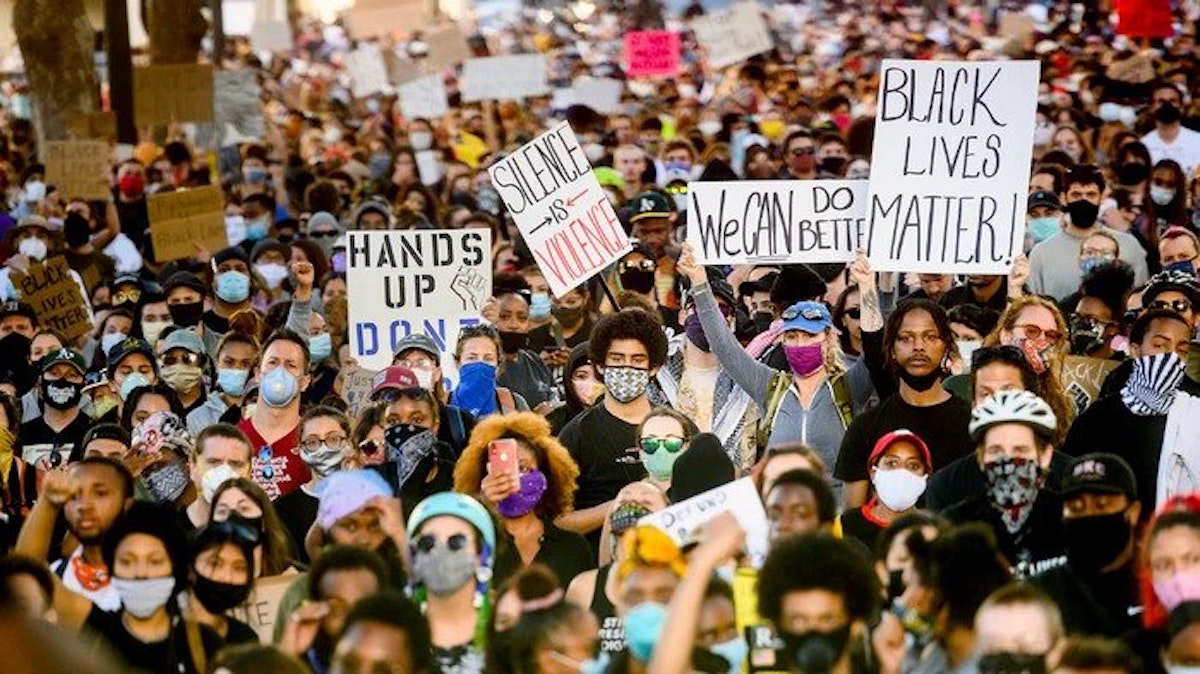 It’s horrifying yet unsurprising — far-right extremists, including white supremacists, militia members, and so-called “boogaloo boys,” are trying to exploit this moment in order to sow fear, hate, and violence and distract from the core issue at hand: racial justice.

It’s important to be clear: those trying to take advantage of what’s happening do not, for one second, take away from the protests’ legitimacy. Rather, they only underscore the importance and success of these protests in shining a spotlight on white supremacy and racism in America.

The murders of George Floyd, Breonna Taylor, Ahmaud Arbery, Tony McDade, Jacob Blake, and so many others are the tragic and unsurprising results of a racist and broken system — the same system that fueled Charlottesville, Charleston, and the litany of other white supremacist attacks, including some of the very extremism we detail below.

Here’s a summary of what we’ve seen:

Reports indicate that there was explicit discussion of shooting protesters on a Kenosha militia Facebook page before the attack. [1]

Make no mistake: this is not an isolated incident. Rather, it is the inevitable result of a horrifying rise in violent far-right extremism that has gone largely unchecked.

After the attack, white supremacists and other extremists celebrated the attack. Jason Kessler — a defendant in our Charlottesville lawsuit — heralded the Kenosha shooter, Kyle Rittenhouse, as a “young [man] trying to defend their families and property." Another defendant in our suit, Matthew Parrott, compared Rittenhouse to domestic terrorist James Alex Fields Jr., claiming both “did nothing wrong.”

The leader of Neo-Confederate group League of the South Michael Hill — both defendants in our lawsuit — threatened more vigilante violence: “think what 1,000 trained, skilled, experienced, and dedicated White men could accomplish.”

A week later, two Missouri men were arrested on firearm charges after a tipster warned law enforcement the pair were traveling to Kenosha with assault-style weapons for a possible shooting. One allegedly told police they’re part of a militia group. [2]

A more comprehensive list of far-right violence targeted at protesters can be found below.

2. Violent car attacks — similar to the car attack in Charlottesville in 2017 — are on the rise.

In June, an admitted Ku Klux Klan leader drove his car into a crowd of protesters in Richmond, Virginia. [3] Nearly three years ago, one of his fellow white supremacists did the same thing, not that far away, in Charlottesville.

As we told NPR, the use of car attacks against peaceful protesters is increasingly a deliberate terror tactic for white supremacists. The University of Chicago tracked an alarming rise in vehicle attacks, with over 50 attacks from the start of protests in May through mid-June alone. [4]

Read more about the connection between the tactics used by extremists in Charlottesville and subsequent extremist attacks in our JTA op-ed here.

Identity Evropa — a white supremacist group that is a defendant in our Charlottesville suit — posed as “antifa” in a viral tweet that urged violence and looting in white neighborhoods. [5] The tweet made the rounds on sites like Facebook and NextDoor, and people were encouraged to “defend” themselves against the supposed antifa threat. Twitter ultimately suspended the account.

Other examples of far-right disinformation and deception around the protests include:

-- In D.C., members of the white nationalist group VDARE posed as "VICE Canada" reporters to broadcast names of antiracist protesters. [6]

-- Facebook says that they suspended accounts associated with white nationalist groups, which advocated bringing weapons to the protests and spread disinformation related to “antifa.” [8]

Disinformation campaigns and deceptive tactics like these are a hallmark of the white nationalist movement. Much like we saw in the lead up to the 2016 election and in so many other moments since, disinformation is used to tear communities apart — and these extremists believe there’s no better way to do that than capitalizing on racial fears and tensions.

4. Far-right extremists — including neo-Nazis, white supremacists, and members of the “boogaloo” movement — are trying to spur violence at the protests, including against Black protesters to spark a “race war.” [9]

The Department of Homeland Security warned law enforcement that white supremacists — including some boogaloo extremists — are encouraging supporters to shoot protesters. One message encouraged shooters to “frame the crowd around you” for the violence. [10]

Some white supremacist accelerationists — who seek to speed the collapse of society through violence — suggested murdering protesters and spreading rumors that law enforcement snipers are responsible, per the Anti-Defamation League. [11]

White supremacist street gangs are showing up at BLM protests and telling their followers to report any “anti-white activity.” These groups are similar to Rise Above Movement, which attacked protesters in Charlottesville. [12]

A leader of Identity Evropa (which has tried to rebrand as American Identity Movement) stated online that he’s attended numerous protests and said it was time for officers firing rubber bullets and tear gas to “aim for the face.” [13]  As our suit details, Identity Evropa was a key organizer of the Charlottesville violence, specifically leading the efforts to organize white supremacists from around the country for the weekend of planned violence.

-- In Tennessee, a man who attended Unite the Right in 2017 with white supremacist group League of the South — a defendant in our Charlottesville lawsuit — was arrested at a Black Lives Matter protest after trying to attack several people. [15]

-- A white supremacist carrying an umbrella and wearing a mask in Minneapolis — deemed "Umbrella Man" after a viral video — smashed windows and tried to incite rioting and violence during George Floyd protests. [16]

-- An armed white man with apparent ties to neo-confederate hate groups was arrested for firing shots at a protest in North Carolina; he’s a member of Sons of Confederate Veterans, which has deep ties to our Charlottesville defendant League of the South. [17]

--A Philly journalist was allegedly attacked by a group of racist bat-wielding vigilantes. [18]

-- A man from Illinois allegedly brought bombs to a Minneapolis protest with the goal of starting a riot. He was seen handing out explosives and encouraging protesters to throw them at police. [19]

-- In Queens, a racist white man with knives strapped to his arms tried to stab and mow down Black Lives Matter protesters. [20]

-- In Albuquerque, a man was allegedly shot by a right-wing militia group during a statue protest. [21]

-- Leaked chat logs show that far-right extremists, including the group Patriot Coalition, have been planning and training for violence, sourcing arms and ammunition, and even suggesting political assassinations ahead of rallies in Portland. [22]

In other cases, armed extremists are showing up to protests in hopes of a “boogaloo” — their code for a second civil war. [23]

Some claim that they’re there to “protect” the protesters. But we should be very clear about who these people are: boogaloo extremists are a loose coalition of far-right militia extremists who urge a second civil war, revolution, or other violent anti-government resistance.  They believe these protests can be used as a catalyst for the violent upheaval they’ve long wanted.

In late May and early June, an alleged “Boogaloo” extremist killed a Santa Cruz deputy and injured another during a fatal ambush — and was then also charged with killing a federal security officer and critically wounding another in Oakland. Charges detail how he traveled to Oakland with an alleged accomplice and planned to exploit the Black Lives Matter protests to kill cops and spark a second civil war: “Use their anger to fuel our fire. We have mobs of angry people to use to our advantage,” he wrote. [24]

-- Three "boogaloo" extremists were arrested for trying to incite violence at Black Lives Matter protests in Las Vegas. On June 17th, they were indicted by a grand jury for conspiracy to cause violence. [25]

-- Denver Police also seized automatic weapons and tactical gear from two anti-government gun enthusiasts who call themselves “Boogaloo Bois” at a protest in May. [26]

-- Two men in Minneapolis were taken into custody on September 4th after the Justice Department charged them with trying to support Hamas. The men claim to be members of the "Boogalo Bois." [27]

The ADL's Center on Extremism has a helpful rundown of right-wing extremists' presence at protests as well as a sampling of extremist-related and hate-based disinformation campaigns meant to exploit Black Lives Matters demonstrations.

5. Neo-Nazi accelerationists urged terror attacks on synagogues and infrastructure during the protests. [28]

They noted that police, firefighters, and paramedics are spread thin, therefore providing an opportune moment for their attacks.

This is all horrifying — and it only affirms the importance of the protests and the fight against white supremacy and extremism.

At IFA, our Charlottesville case provides one specific way to tackle the systems of white supremacy, taking on the leaders and hate groups at the center of this violent movement. The case is headed to trial, with our team winning some critical court decisions this year.